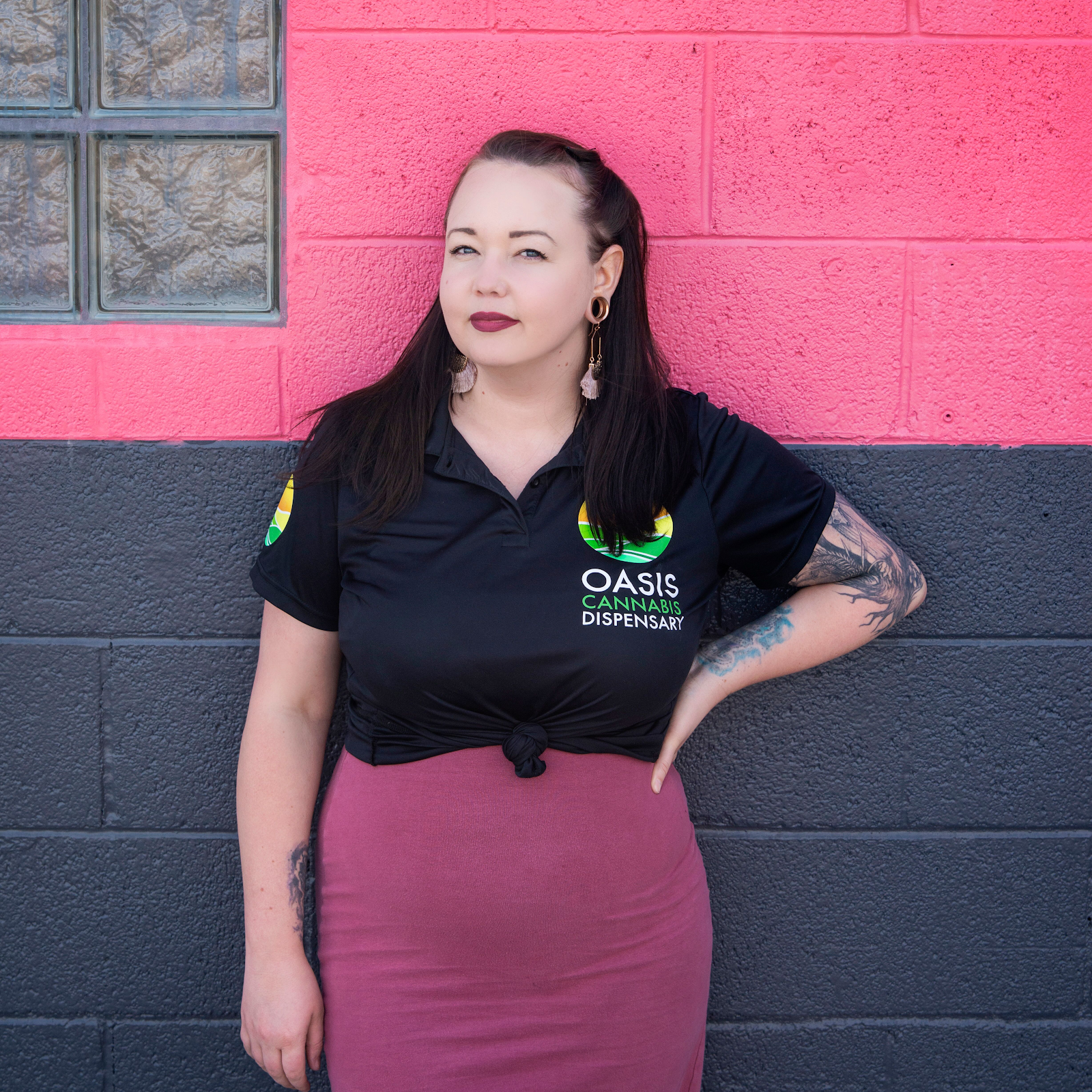 Raised in Northern California, our Retail Operations General Manager at Oasis, Samantha Shafer, has always had a special connection with cannabis. This week, we caught up with her to get a closer look at her work and how she made it into the cannabis industry.

I grew up around cannabis as a cash crop in Northern California. I lived in a rural area, and a lot of people in rural Northern California are involved in cannabis in one way or another. I visited Colorado and found it to be really beautiful. I moved there in 2010, and I realized there was a medical cannabis industry being created. At first, I figured it was a good way to make money while I finished school. It pretty much dominated my life right away. I quickly rose to a management position, and it never really stopped from there.

I got my start at the Dandelion, which is a dispensary in Boulder, CO. The owners later merged with others and became Native Roots. I got my training from some of the biggest names in the industry. I knew this was an industry that if enough momentum got behind it, you could really go somewhere and do something. I finished three-quarters of my degree in nutrition. I realized if I graduated I could make 40k a year. But if I put my time and energy in the cannabis industry, which I do, I could make quite a bit more than that.

I typically arrive at work by 8 or 9am. The first thing I do is take a look at the numbers - where we are for the month, for the week, for the day. I take a look at the health of the store financially as a general practice to start my day. Then, I move on to connecting with people to strategize and talk about our goals. We try to keep a top three to five projects a day and prioritize those goals.

These goals typically center around things like restructuring programs such as the pricing program and holding meetings with my sales team and my management team. Right now, we’re overhauling our HR program. I like to take a big project and divide it into smaller, more manageable tasks to get to the bigger picture. Each day, I work about ten to twelve hours.

One thing I noticed about the cannabis industry is that a lot of it is trend-driven. A couple of years ago, it was about cookie strains, and right now a lot of the hype is around berry strains. We’re watching strains and lineages, as well as people cross-breeding strains. It’s important to keep an eye on what the hype is, who the influencers are, and get an idea of what’s working and what isn’t.

You also want to keep an eye on different times of year. For example, during summer in Las Vegas sales take a hit, so it’s important to look at that in terms of staffing. I also find it important to ask, “What does your cyclical business look like from year to year?” It’s harder to track in this industry because it’s not as solidified, but because we’re still developing this is hyper-critical.

I’d say we face challenges with banking and software support. I think the challenges are not only in the hands of people working within the industry, but also for the regulators who have to build a framework for the industry while keeping the public safe. We are all working together to build a new industry from the ground up and it takes a lot of dedication, trust, and transparency on all sides.

Furthermore, we get great employees, but there is a hiring pool of people I cannot access because of the stigma still associated with cannabis. I am excited for us to move this industry forward because I’m hoping that stigma starts to dissolve, and that hiring pool opens up a little bit more. It’d be interesting to see more people from other industries and a lot of experience come in and teach us how to build an industry from the beginning. We want to be ethical, compliant, and profitable. I think Oasis has done a really good job finding these people.


I have experienced some things that I’ve noticed in the cannabis industry that other women may have noticed. It feels like when you get to a certain level, you might be the only female at the conference table. My advice to someone in that position would be to try not to be intimidated by that fact that you’re the only woman in the room but try not to overcompensate. If you worked hard enough to get there, you can be confident that you’re doing the right thing by the business. Even if you make a mistake, it’s not because you’re a woman, it’s because everyone does. There’s a reason you’re at the table. You have value, and there’s something you can add to the company.

My advice to people working their way there, put your head down and work hard, long days. Say “yes” when they ask you to work a shift you don’t want to. If you don’t work extra hard all the time, someone else will and someone else will be recognized for it. I’ve been lucky enough to be at the table and to be reminded of that. We all make mistakes, but every mistake is fixable.

I started at Oasis in early March. On April 6th, we had our grand reopening. It’s not easy to hit the ground sprinting like that. We had to plan the entire event. We had to make sure all of our ducks were in a row. We had 4/20 weekend just a couple of weeks after that. It was a big challenge, but it ended up being very successful for the company. We acquired a good number of new customers that month. In May, we’ve seen quite a bit of growth in terms of people coming in the door and positive comments, as well as people who were interested enough to come back. It was really successful in terms of getting people to know who Oasis is. I’m really proud of how well we started off.

I’m still learning about Oasis, so I’m not sure if I’m the person to speak on that. I think Oasis has a lot of potential. I hope to see Oasis move to other states in the U.S. and grow their organization within Las Vegas as well. My hope for Oasis is that we go east and that we expand as a business. They’re going to regulate things in a way that makes more sense out there, I think.

Something people should know about me is that I try to very live authentically within myself. I don’t like to change things about who I am. I like to present the real, natural me. What you see is what you get. I live authentically in my skin, and I say things as I see them. I think that has added to my success so far in the cannabis industry.

I like to rest and sleep. I also like hanging out with my husband and my dog.

We’re glad Samantha is with us at Oasis and keeps the dispensary running ethically and profitably. She truly is an asset to the overall CLS family, and we look forward to working with her more in the future. Thanks for your time, Samantha!

« Back to All Posts